The launch of New Paths Music as a registered charity was celebrated in London on 16th January 2018. 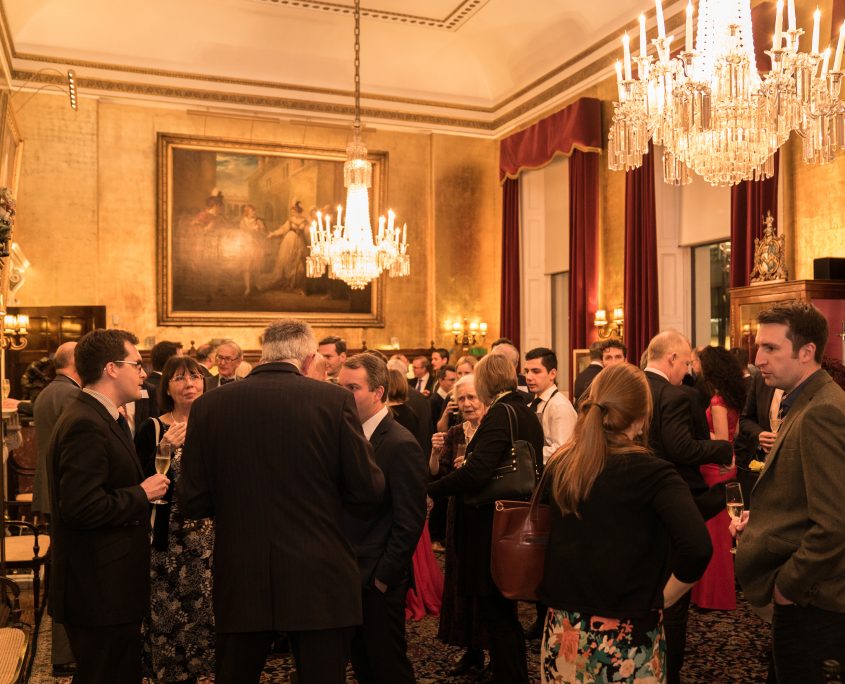 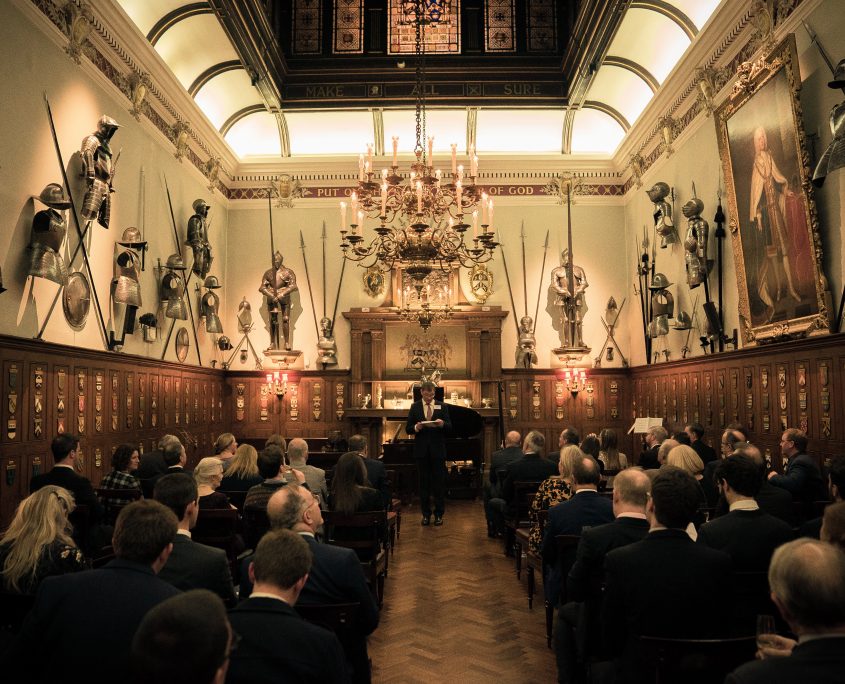 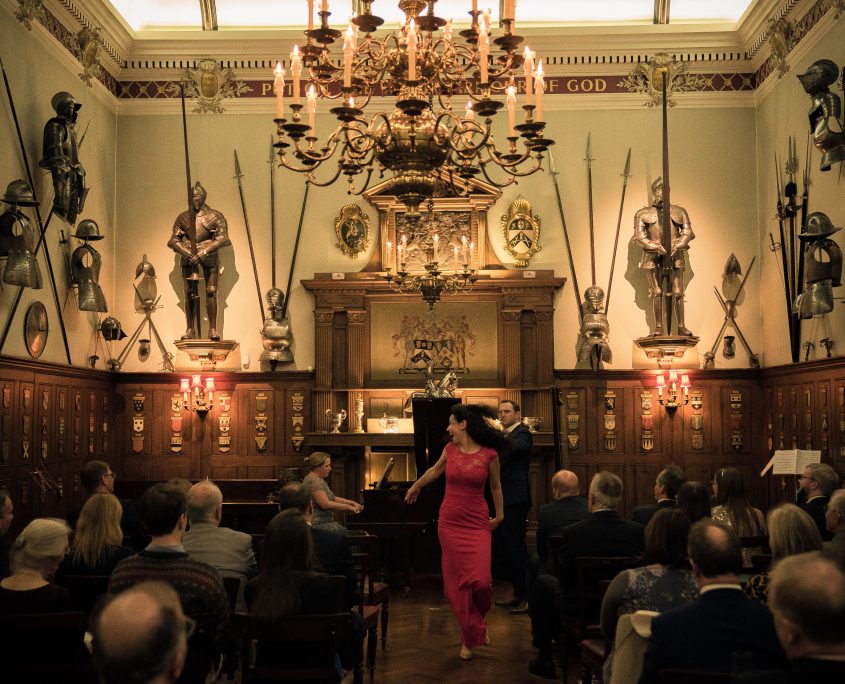 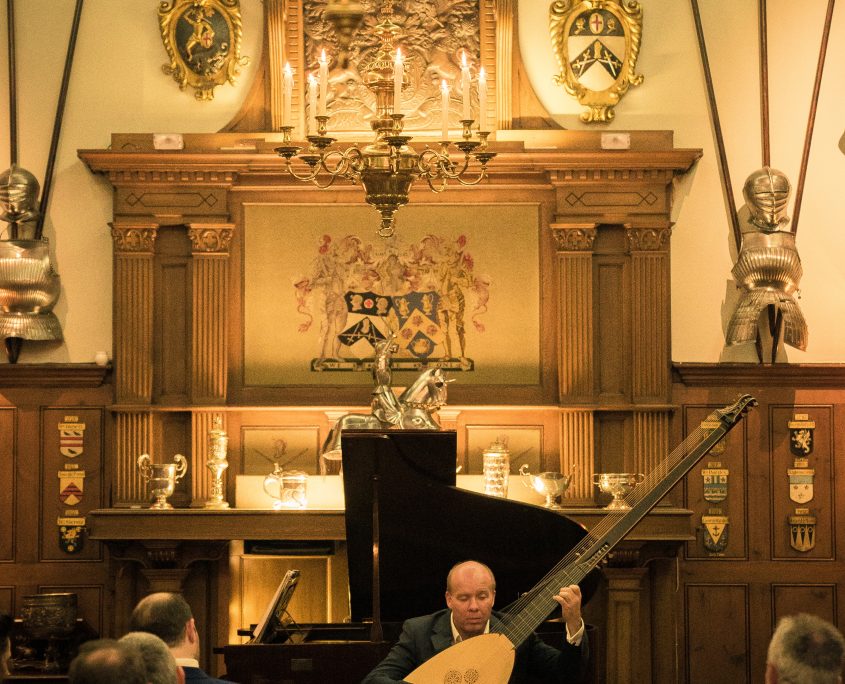 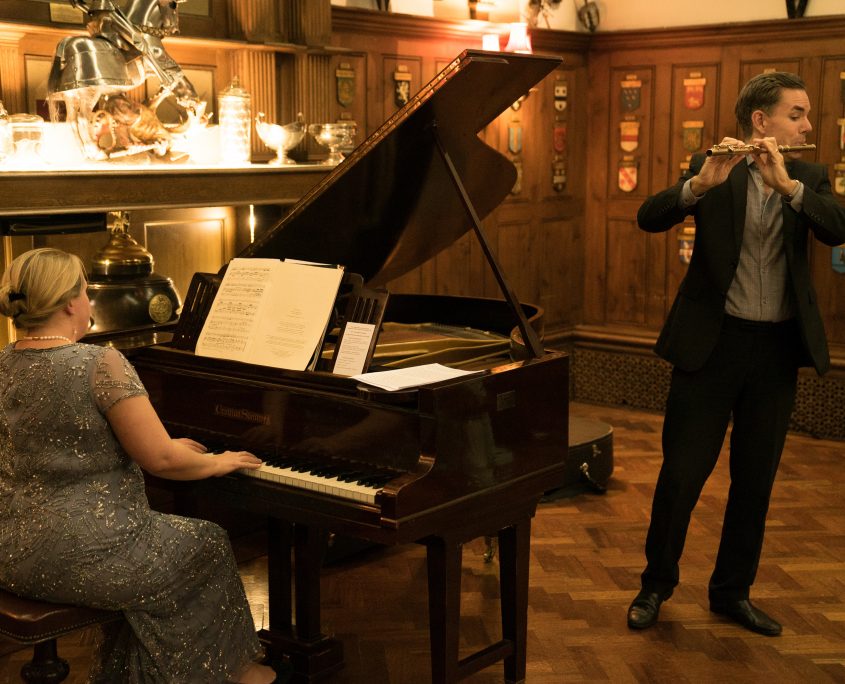 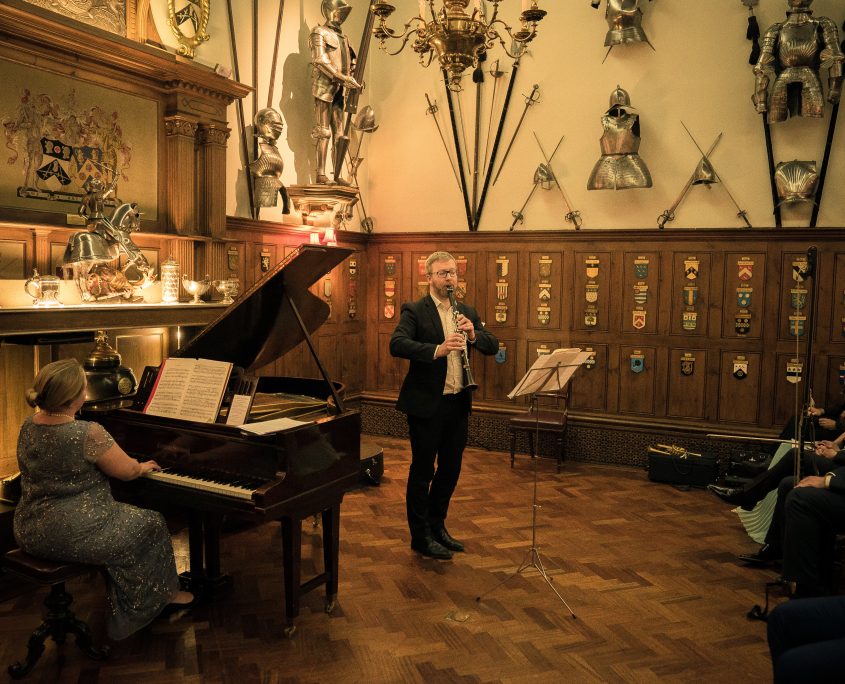 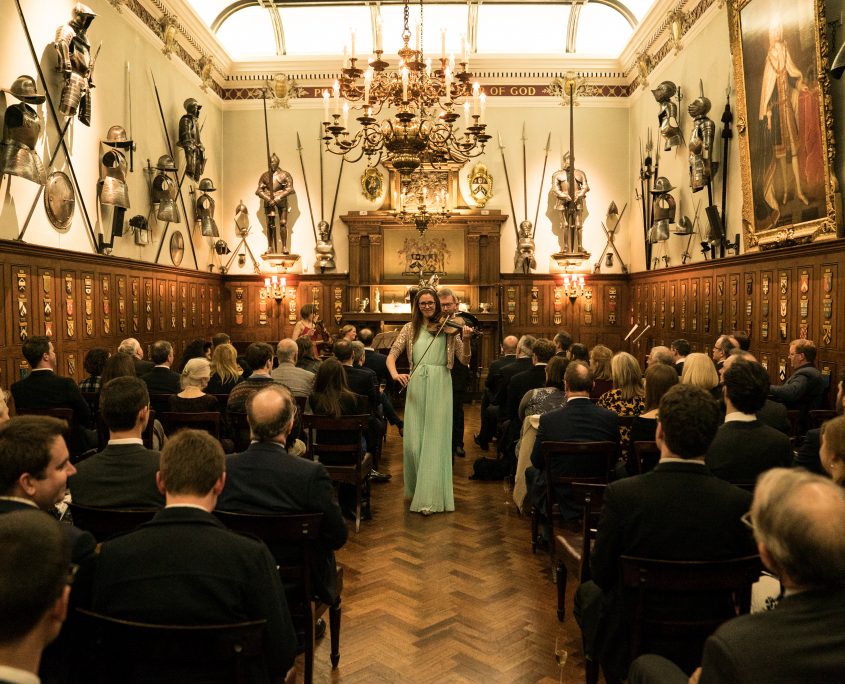 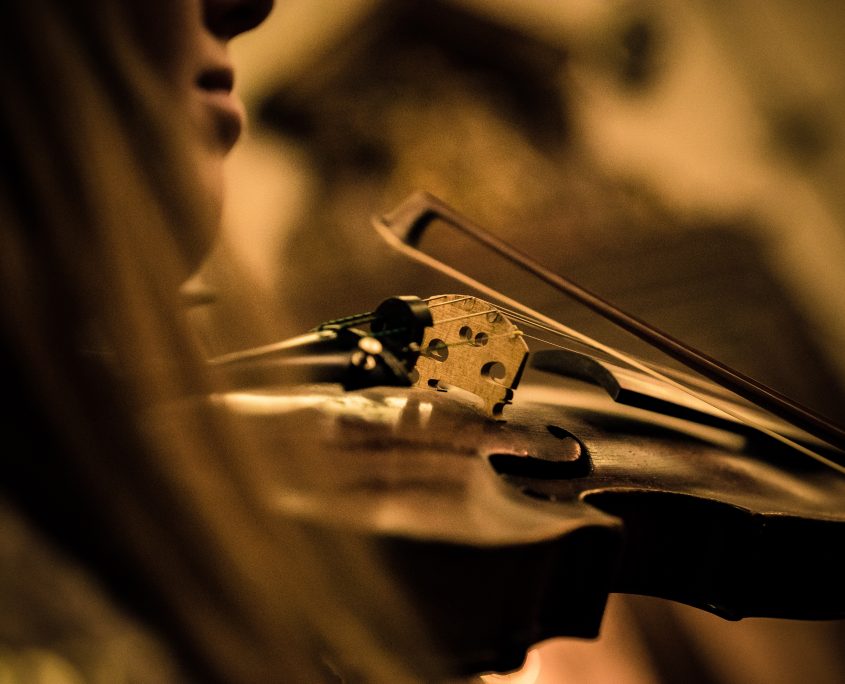 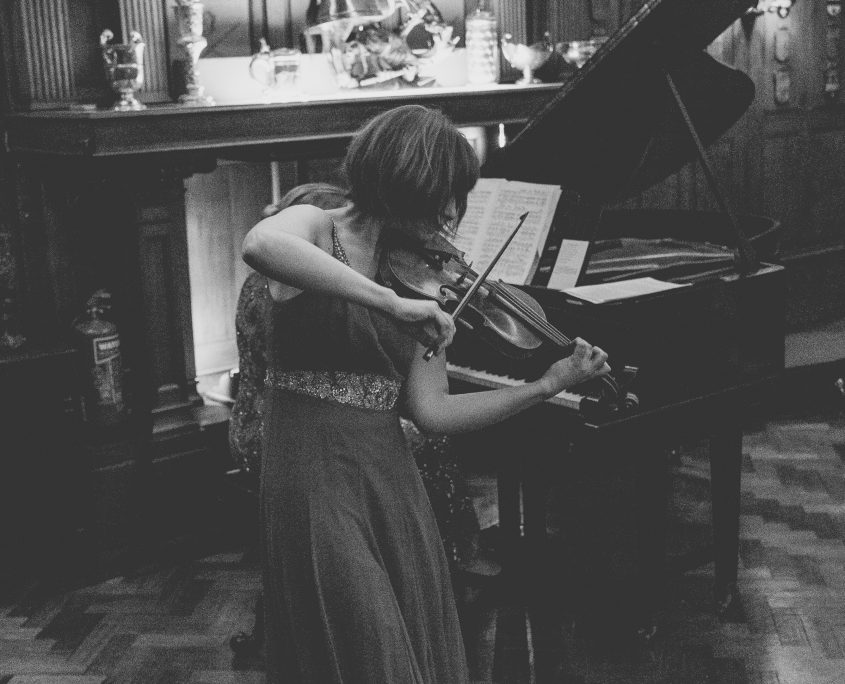 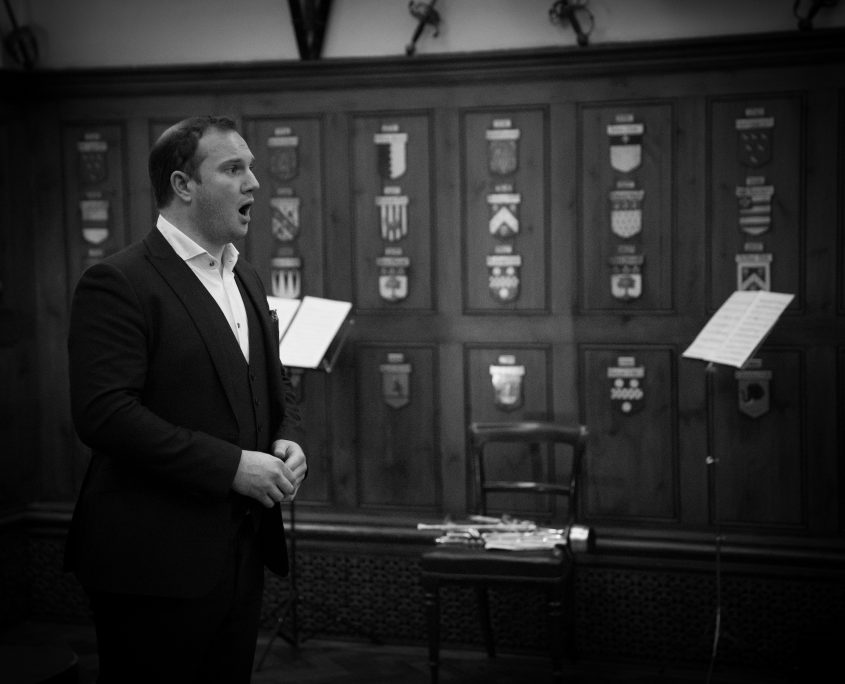 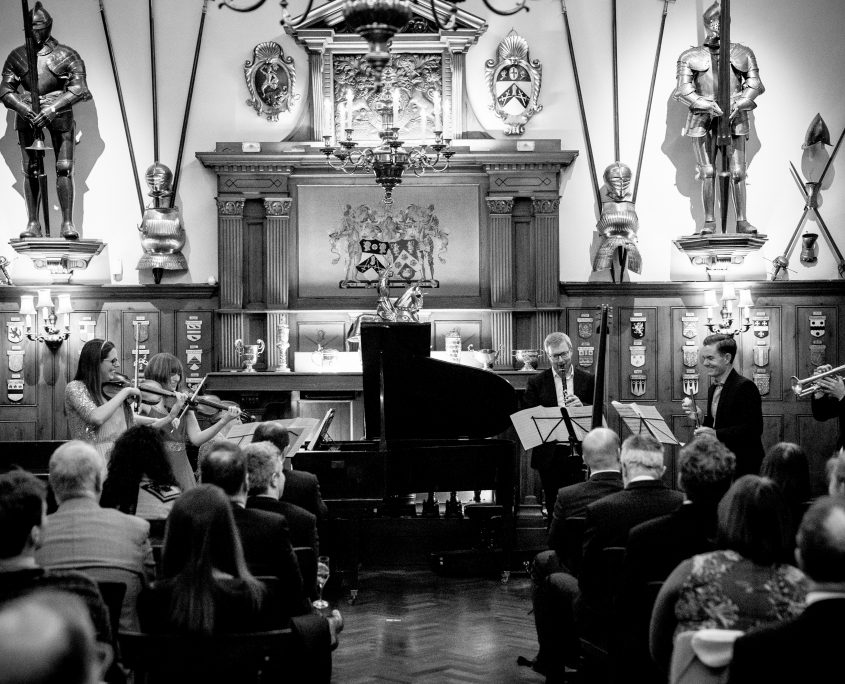 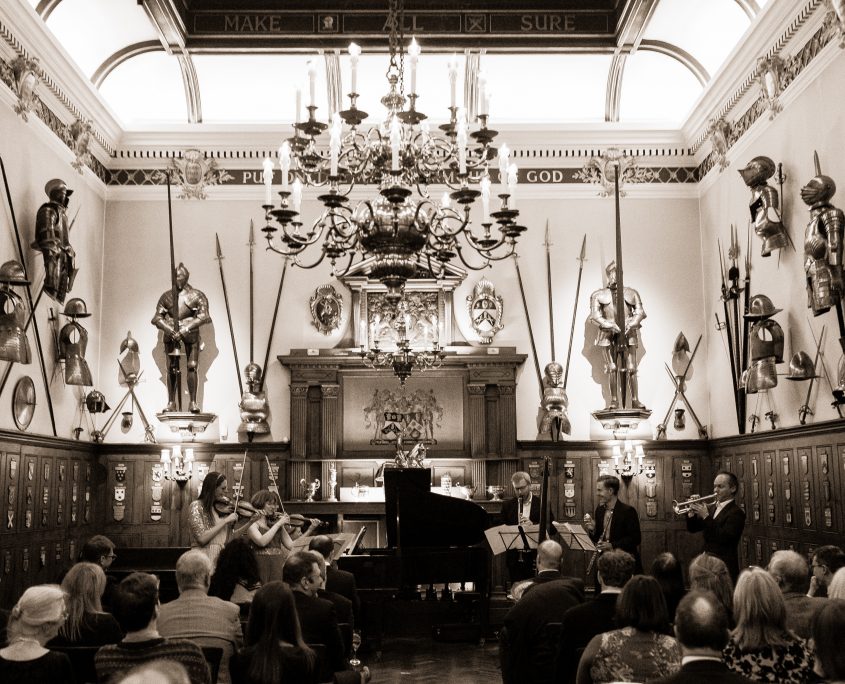 A group of 80 artists, volunteers and supporters from all over the UK gathered in the capital with the trustees of New Paths to mark the occasion of this young and dynamic festival becoming a registered charity.

The special event was held at The Armourers’ Hall, which lies in the heart of the City – where New Paths Founder, Roland Deller, worked for many years before he established the festival. Mr Deller spoke of New Paths’ commitment to a vigorous presence of music in our culture:

“Standing in this magnificent hall among these impressive and terrifying instruments of killing and of power, it is tempting to think that music and the arts are all about softening the hard edges of this life. Of course, that is one of the comforts and functions of music. But at New Paths we believe that music is a part of life in all its fullness.”

He spoke of his love for his hometown of Beverley and the receptive climate which New Paths has found there for exploring new avenues for music and for nurturing new audiences. Mr Deller explained that after two highly successful initial years, New Paths has set up as a charity to ensure the festival has a sustainable future.

The brand new charity published its manifesto for the launch. It sets out the charity’s bold vision and mission, plus its aims and activities, and can be viewed here.

Mr Deller also talked about the positive impact which the festival has on social cohesion:

A stellar line-up of nine New Paths artists dazzled the audience with stunning performances of pieces chosen by Artistic Director Libby Burgess to illuminate some of the different strands of New Paths’ work and the vast variety of music which it presents in the festival. The full programme can be viewed here.

Singers Marcus Farnsworth and Aoife Miskelly opened the programme with a musical journey through life, after which Miss Burgess spoke of the ways in which music enriches lives. She spoke of New Paths’ ethos of inclusivity and accessibility, explaining that New Paths brings music of the highest quality to young children through its free concerts for families (which have been consistently over-subscribed) and to the elderly through free performances in nursing homes.

Miss Burgess gave examples of the innovative ways in which New Paths programmes and performs music in order to reach the widest possible audience, noting that all community performances are given by the main festival artists (not a ‘B-team’):

“I have no interest in dumbing down in our choice of music; I believe that good music and quality performance speak for themselves. However, I am hugely interested in presenting that music in fresh ways.”

She described how New Paths’ free, non-traditional performances which celebrate the town of Beverley itself have captured the imagination of the local community. Miss Burgess outlined a flagship project of the 2018 festival: a ‘Musical Takeover of the Town’ – an entire day of free music throughout the town, which is expected to attract large audiences (including people who might not attend a traditional ticketed concert). It will feature performances by children who play brass instruments with the East Riding Schools Music Service and children from Freddie’s, a school in Hull for children with profound and multiple special needs.

There followed a musical journey through history, beginning with the earliest known piece for theorbo by Kapsberger (1604) performed by Matt Wadsworth, through Mozart and Finzi, to a piece by the highly original contemporary American composer Nico Muhly performed by Fenella Humphries (which included audience participation)!

Mr Deller emphasised that promoting the composition and performance of new music is an important part of New Paths’ work:

“Every year since the beginning we have commissioned the composition of a new piece from a leading composer and given its world premiere. So far there have been no riots! And our programmes are replete with music by living composers. Thus, in 2018 we present works by, among others, Judith Weir, Nicola LeFanu, Cheryl Francis-Hoad, Thomas Hyde, Huw Watkins, and Benjamin Rimmer.”

“We’re thrilled that for this festival we have commissioned Diana Burrell – who celebrates her 70th birthday this year – to write a new set of viola songs. The world premiere will be given on the opening night of the festival. This has been made possible by a very generous grant from the Finzi Friends to whom I’d like to express our most sincere thanks.”

He then spoke of the funds which the charity seeks to raise in order to present the 2018 festival:

“The grant from the Finzi Friends got us off to a flying start with the funding we need to raise in order to mount the 2018 festival – a total of £50,000. The money raised will enable us to undertake the 40 events making up the festival.”

Mr Deller summarised the vast array of educational activities in the festival, remarking that:

“In its way the festival also seeks to address one of the other most acute challenges we face in Europe and the world at the moment – education, or rather the lack of it and the need for more of it. The festival has huge potential to make a significant contribution to the musical education of the region and beyond.”

To conclude, Mr Deller reflected on one of the charity’s other aims – to foster awareness and appreciation of music as an international art form and to encourage international musical co-operation.

“Surely music has a role to play in helping to combat the isolationism we see around us today. In our 2018 festival we are excited to be celebrating Nordic music and the links between Scandinavia and Yorkshire. Our team includes four outstanding musicians from Sweden, Norway and Iceland.”

Aptly, the musical culmination of the evening which followed was a whirl-wind journey around the world featuring dazzling virtuosity and breathtaking performances of music from a variety of countries.

New Paths Music Ltd.’s Registered Charity Number is 1176545. The programme for the 2018 New Paths festival can be viewed here.

No charity funds were spent on the London Launch evening.

A ticket to a better world: 2018 festival tickets go on sale today

Latest newsletter: A zig zag way of life in the East Riding
Scroll to top