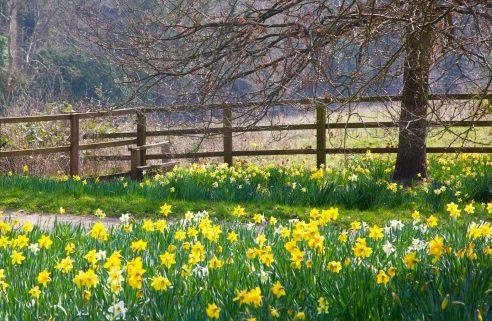 Now that the “year’s at the spring”, we’re counting down the weeks until the New Paths festival bursts forth into Beverley, bringing with it forty of the country’s leading musicians for a joyous celebration of music making. We’ve packed over thirty events into the long weekend, so, rise up and come to the East Riding of Yorkshire this Easter for one of the most exciting new festivals in the land.

The opening concert, On this Island, is a springboard into the festival and is a brilliant showcase of the garland of themes encircling the spring weekend in beautiful Beverley.

Set in front of the spectacular Great West Door of Beverley Minster, with its beautiful carvings of the four seasons, we are treated to a performance of Beethoven’s radiant and evocative Spring Sonata, by Fenella Humphreys and Libby Burgess. Recently introduced to Beverley for the first time whilst visiting the area for her City of Culture concerts, Fenella can’t wait to return for the festival. Her most recent disc – Bach to the Future 2 – was Editor’s Choice in Gramophone Magazine, and so we can’t wait to hear her either!

The astonishing programme also includes one of Brahms’s great masterpieces of chamber music, the Horn Trio in E flat, in which Libby is joined by Francesca Moore-Bridger and Jamie Campbell – who makes a very welcome return to the festival, having stunned the audience last year with his heartfelt playing of Brahms’ violin sonata in D minor. We are thrilled to be continuing our journey through the chamber music and song of Brahms, our namesake composer whose music forged “New Paths”. The following day John Slack also makes a very welcome return to the festival, to perform Brahms’ autumnal F minor clarinet sonata, as part of ‘A Retrospective’ – a journey backwards through life.

Standing shoulder to shoulder with Bach (see below), Beethoven and Brahms, is Benjamin Britten; the Fourth B. We are delighted to take St George’s Day, falling on the Sunday of the festival, as a prompt to celebrate the glorious music of this Fairest Isle, including in particular the great Britten.

Follow the Four Bs as a way, or roadmap, through the festival:

Two great song cycles by Britten bookend the festival, each stemming from a life-changing meeting for the man. We’re thrilled to welcome home Claire Booth to sing Britten’s song cycle, On this Island, in the opening concert. The cycle is a setting of texts by Auden whom Britten met whilst both men were working for the GPO Film Unit (collaborating most famously on Night Mail). Nocturne, the fourth song in the cycle, foreshadows our nocturnal concert in St Mary’s – Under the Starry Skies – the extraordinary programme for which we will be announcing on Friday.

Claire is one of a number of our homecoming artists. We’re thrilled to be welcoming back to Beverley three other wonderful musicians who grew-up here: Rachel Robson, Nick Wolmark and Ildikó Allen.

On the closing night, tenor Andrew Tortise performs the Seven Sonnets of Michelangelo, the first songs dedicated by Britten to his beloved Peter Pears, whom Britten met shortly after Auden. Britten’s musical language is at its most consciously European in this cycle and includes one of Britten’s very greatest songs Veggio co’ bei vostri occhi un dolce lume. Like many composers and musicians, Britten loved Italy and was inspired by the country. Our rush hour concert, Italian Hour, offers a 60-minute romp through music inspired by Italy, all written by non-Italians. The programme will be announced on Monday so keep your eyes open for that news on the morrow.

A festival highlight is sure to be our free Musical Tour of the Minster. We are keeping the programme of this very special event secret for now, but we can reveal that our other festival tenor Stuart Jackson will perform Britten’s third canticle, Still Falls The Rain, again with horn player Francesca. Almost all of the festival musicians will be participating in this extraordinary event, performing in every nook and cranny of the Minster – truly a celebration of this spectacular building.

C is for … Contraband

We are honoured to be hosting the first ever performances by exceptional new baroque group Contraband, directed by harpsichordist Christopher Bucknall. The lifeblood flowing through the performances of Contraband in the festival is the awe-inspiring music of Johann Sebastian Bach, the first and the last of the Four Bs – the fount of creativity for generations of musicians and a cornerstone of the art of music.

Christopher has assembled an elite squad of barqoue musicians – some of the leading players in Europe – for a series of electrifying performances during the festival in venues throughout town.

On the first day of the festival we hear two of the great Bach solo cantatas in a late-night concert in the atmospheric chancel of Beverley Minster, in which Contraband is joined by singers Claire Booth and Johnny Herford.

On the Friday night Christopher performs Bach’s glorious Italian Concerto in Italian Hour. The café bar of the East Riding Theatre hosts a pop-up Saturday afternoon performance of Bach’s Coffee Cantata in which Katherine Crompton and Edward Grint join Contraband for this hilarious piece. In the evening, the group move to the main stage of the East Riding Theatre for Gourmet Baroque, a lavish – and at times boisterous – concert of Baroque favourites including Bach’s popular fifth Brandenburg Concerto.

Over the next few weeks we will be tracing the various Bach journeys of our artists as they sing, play and record the music of Bach throughout the world. We’re thrilled that Bach is in the DNA of our festival.

The genetic material of the New Paths festival also includes its dynamic pipe organ events. The festival is inspired by the memory of Alan Spedding who was for many years the organist of Beverley Minster.

We are proud to welcome international recitalists, Christian Wilson and Andrew Dewar, plus three talented students, Asher Oliver, Benjamin Mills and Paul Greally, to the festival. The students include recipients of bursaries from the Alan Spedding Memorial Fund to attend Oundle for Organists. We will once again be supporting that memorial fund with our Come & Sing event. And Asher Oliver will be performing one of Alan’s organ works in the Musical Tour of the Minster.

Christian Wilson’s recital, Orb & Sceptre, in Beverley Minster on St George’s Day is a feast of music of the British Isles including the world premiere of a new piece co-commissioned by the festival with Sound Scotland from Alasdair Nicolson. The recital also features works by Bairstow, Mendelssohn, Purcell, Byrd and Walton.

This year we travel to Bridlington for the recital, French Connections, by Andrew Dewar – organist of the American Cathedral in Paris. An organists’ outing to the English seaside calls for the Five Ss: Sun, Sea, Sand, …. Socks and Sandals.

Let the spring tide of the North Sea pull you to the East Coast next month.

Ornithology: the time of the singing of birds is come

April 2017 is 25 years since the death of Olivier Messiaen. Andrew’s recital pays homage to this most colourful of composers in a programme of music of his circle. We mark the anniversary in a number of other concerts. Messiaen had a life-long obsession with ornithology and bird song. In Home and Away, we hear flautist Fiona Slominska play Messiaen’s Le Merle Noir, based on blackbird song. And there will be more Messiaen birdsong in the Musical Tour of the Minster, but the programme for that special event is under wraps so that is all we can say. Taking us full circle back to the opening night concert, Claire Booth sings Messiaen’s verdant Trois Mélodies.

Let us then finish with a couple of lines of poetry tying this whole thing together: “The spring is sprung, the grass is riz. I wonder where the boidie is.”

We very much look forward to welcoming you to the festival in four weeks, when the winter shall have passed and the rain shall be over and gone.

With all good wishes,