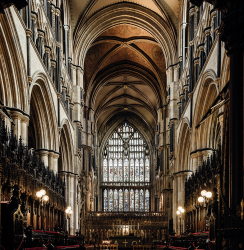 We are thrilled to host one of the very first performances of brand-new baroque group Contraband, founded and directed by one of the finest harpsichordists of his generation, Christopher Bucknall. Featuring a hand-picked selection of the best baroque players of Europe, and joining with New Paths singers, Contraband will present a reflective late-night concert of great Bach solo cantatas, in the atmospheric chancel of the Minster.

Opening Night: On This Island

A Retrospective
Scroll to top