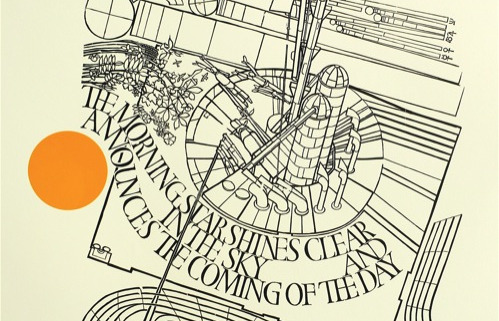 On show in Beverley Minster during the festival is an exhibition of linocuts by Andrew Anderson. The exquisite works displayed are drawn from two areas of Anderson’s output as a linocutter – works inspired by Norfolk country churches, and works based on love poems in the Old Testament known variously as ‘The Canticles’, ‘The Song of Solomon’ and ‘The Song of Songs’. These second century BC love poems have inspired artists and musicians through the ages.

Anderson sees both the verses and his depiction of rural churches from the viewpoint of an architect.   For 35 years Anderson was architect to a large number of churches including two Norman Cathedrals. Whilst the imagery in the pieces is at its root architectural, there is something mysterious about them: architectural forms are combined with surprising perspectives, and layers of meaning in text and image overlap. Now retired and living in Beverley, this retrospective on Anderson’s life as a linocutter is a unique opportunity to see this selection of work gathered together for the first time.

Beverley Minster is open 10am – 4pm on the Thursday, Friday and Saturday of the festival.

America the beautiful
Scroll to top