It is t-minus 74 days until the 2019 Beverley Chamber Music Festival blasts off!  We begin the countdown with this fivefold feature on the festival:

The full moon which lit up the sky last month – the ‘Strawberry Moon’ – was exceptionally large and bright.  The next full moon – known as the ‘Buck Moon’ or ‘Thunder Moon’ – falls on Tuesday, 16th July (just four days before the 50th anniversary of NASA’s Apollo 11 moon landing).  But on that night there will be a partial eclipse, visible from 9.06pm until 1:17am! If you are tucked-up indoors during that time you can watch it live from telescopes at the Royal Observatory here.  And in the meantime you can enjoy a stunning array of photos of the sky at night here.

This September, Beverley will be bathed in musical moonlight as violist Sarah-Jane Bradley and pianist Martin Roscoe give a late-night performance of Beethoven’s evocative Moonlight Sonata and Shostakovich’s final work, his profoundly spiritual Viola Sonata, which quotes the Beethoven.  Set in the beautiful surroundings of St Mary’s Church with its starry ceiling, ‘Captured Moonlight’ is sure to be one of the most atmospheric events in the festival.  Don’t miss it: tickets start at £5; buy yours today.

Sarah-Jane also appears at the festival in the Friday lunchtime recital, ‘Godiva’, alongside mezzo-soprano Kitty Soprano and pianist Libby Burgess.   Their beautifully crafted programme includes two sets of songs which combine voice, viola and piano – by Brahms and by Frank Bridge, who was himself a superb viola player.  The recital also includes songs by Clara Schumann, Rebecca Clarke and Judith Weir.  And it concludes with the world premiere of ‘Godiva’, a monodrama by American composer, Juliana Hall.

And so our thoughts turn to that famous lady of Coventry (who is said to have ridden naked through the streets of Coventry in order to persuade her husband, Earl Leofric, to stop taxing the people).  We are delighted that Coventry takes on the mantle of UK City of Culture in 2021 from Hull. Coventry’s splendid Herbert Art Gallery & Museum, in the shadow of the cathedral, contains an important collection of artworks relating to the story of Lady Godiva including the oil painting by John Collins below.

3. The Rock of Cashel

On the topic of artwork, we are thrilled to announce that the festival will feature an exhibition of two monumental linocuts from the 1960s by Andrew Anderson, The Rock of Cashel (6ft by 3ft) and St Barnabus, the largest linocut he ever made measuring some 7ft in height.

The exhibition will take place in the South Transept of St Mary’s, the church of which Andrew was inspecting architect for many years.  The blocks from which The Rock of Cashel was made will also be on display, giving a fascinating insight into this printmaking technique.

We are enormously grateful to Andrew for exhibiting these huge pieces at the festival and we will reveal more news about the exhibition in due course. Here are just a few examples of Andrew’s beautiful work to whet your appetite: 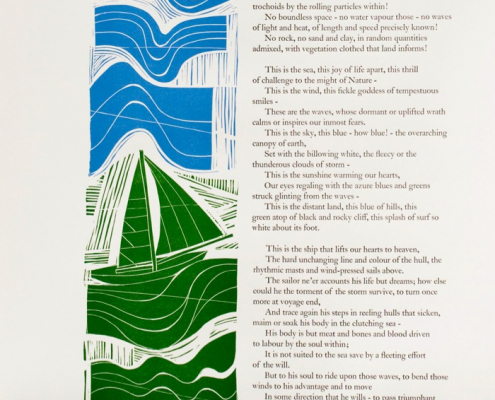 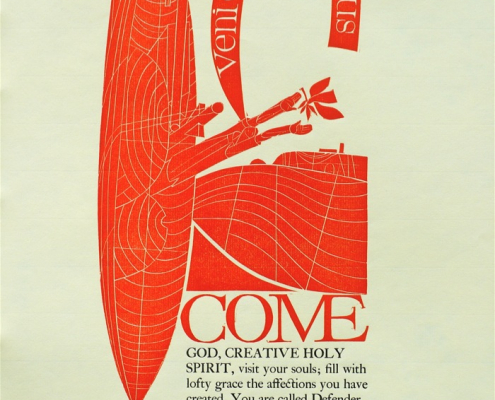 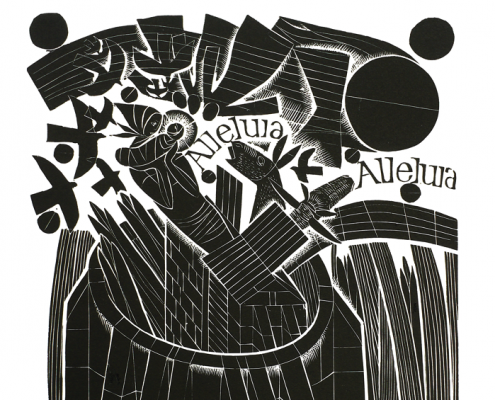 Andrew began serious linocutting and wood engraving in about 1956, when he was nineteen.  That was the year of Finzi’s death in which he wrote this his last short song, beautiful in its simplicity (click on the image to listen to the song):

“Since we loved, – (the earth that shook
As we kissed, fresh beauty took) –
Love hath been as poets paint,
Life as heaven is to a saint;
All my joys my hope excel,
All my work hath prosper’d well,
All my songs have happy been,
O my love, my life, my queen.”

Tomorrow, Sunday 14th July, marks the 118th anniversary of Finzi’s birth and we are so pleased to see that Finzi Friends, the society which exists to sustain interest in the composer, is going strong with a new website.  Finzi Friends provided invaluable support to New Paths last year, funding the commission of Diana Burrell’s Two English Folk Songs and supporting an entire day of Finzi celebrations.  We were touched to find a lovely write-up of that memorable day in a newsletter on Finzi Friends’ new website here (see page 23) and we are proud of our connection with an organisation borne of a love of music and of friendships forged through that.

Speaking of newsletters, we will be publishing our first special edition illustrated newsletter exclusively for Friends & Patrons in August.  If you enjoy reading these email bulletins and would like more in-depth news and stories about New Paths and its community then please consider becoming a Friend or Patron – you will receive the special edition illustrated newsletter and will be supporting an ambitious young arts organisation striving to widen access to high quality music.

Become a Friend or Patron

This larger window shows a tree amongst whose roots appear the initials and birth-dates of fifty English composers, including Finzi himself. The window was commissioned in 1975 by Joy Finzi from the renowned poet, architectural historian, artist and friend of the Finzis, Sir Laurence Whistler CBE (1912-2000).

The window celebrates a ‘family’ of English composers and their frequent inspiration by the English countryside. It also exemplifies Whistler’s own visual and poetic language, rooted in his love of his native landscape. Around the edges of the tree image are quotations from great English poets, reflecting Gerald Finzi’s affection for poetry and lyrical writing.

Just as Finzi found peace during troubled times at Church Farm in the village of Ashmansworth, on the Berkshire/Hampshire border where he moved with his wife, Joy, in 1939, it was for Elgar the move to Fittleworth in the Sussex countryside after the First World War with his wife Alice which gave him the recuperation and inspiration he needed to write the cello concerto and also the three great chamber works which we are featuring in the festival.

Our ensemble in residence, the Brodsky Quartet, will be a key ingredient in our Elgar feast in September, playing the String Quartet and, together with Martin Roscoe, the Piano Quintet.  Their recording of these two works on the Chandos label released in May has received ✰✰✰✰✰ reviews.

We draw this newsletter to a close with footage of the quartet playing on the canal in Amsterdam – in the sort of weather we might be in for later in the week if the forecast is correct.  We know that the gardeners among you are hoping for some showers.  Perhaps the Thunder Moon will do the trick!

The Brodsky Quartet play Paul Cassidy’s arrangement of Mendelssohn’s Auf Flügeln des Gesanges (On Wings of Song) at the 2017 Prinsengrachtconcert in Amsterdam.

To end we leave you with two sets of moonlit words:(a) from Irving Berlin-

“It was as though Heaven
Had softly kissed the Earth,
So that she in a gleam of blossom
Had only to dream of him.

The breeze passed through the fields,
The corn swayed gently to and fro,
The forests murmured softly,
The night was so clear with stars.

And my soul spread
Her wings out wide,
Flew across the silent land,
As though flying home.”

Credits:
English Translation of Mondnacht © Richard Stokes – who we were honoured to welcome to Beverley in the spring.
The photo at the top of this news post is by Kevin Gill.

JS Bach: “The wellspring of my life”
Scroll to top